I have decided to return to the blog after a long hiatus. Part of the problem is staying motivated and part of the problem is occasionally being locked out of the blog by Google. I have been enjoying the hobby as much as ever but not documenting it beyond my FB posts to gaming groups. I started the blog for me to enjoy looking back at my tabletop fun in later years and to share with this community of fellow gamers.

I think it has been over six months since my last post. My wargaming interests have meandered as usual but with a definite bend towards fantasy gaming. I purchased a 3D printer for Father’s Day in June. This has been an amazing new hobby to explore and I have been printing and painting from this device for the past 6 months.

I started playing through the campaigns of the Grande Armee 1805-1807 using my 15mm figures and Napoleon Battles rules. I built a giant teddy bear fur game mat that really adds to the look of these games. I think I will start my return to the blog by recounting these games. 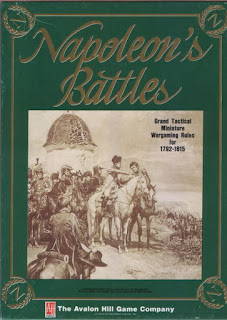 The scenarios available were Austerlitz 1805, Auerstadt 1806, Eylau 1807 and Friedland 1807. At the time of writing this, the first three games are under my belt and planning is underway for a big get together to wrap up the campaign in January 2020.

I have decided to return to Napoleon’s Battles (NB) as a rules choice after experimenting with others such as Command and Colors: Napoleonics and Commit the Garde. NB was my first introduction to historical gaming and holds a special place in my game brain for many reasons.

1) It gives and excellent feel for the period in that the game looks like a big sweeping battle of the period.
2) It has a lot of granularity which I like with both sides of the fight involved through out the game.
3) There are no hexes to distract from the look of the battlefield.
4) All my thousands of figures are based for NB.
5) It is an excellent multiplayer game
6) I love the command and control system

The big downside is that the games take a long time to play. I would say a big battle would take 15-20 hours to complete to a decisive decision. I have had to except this and adapt to this limitation. We plan for long games and then conclude the game with a speculation of how the battle would be completed if it were played out.
I won’t drone on any more for this post and will follow up with write ups for the battles in the campaign.
Posted by Jeff at 14:55