I have the pleasure of hosting a game at our local mini convention. We have settled on WWII in general and Market Garden with Bolt Action in particular. One of the players came up with the scenario idea and I put together 2 platoons at about 750 pts each. I do not own as many troops as the suggested OoB asked for but I have used what I have to get a game. The scenario has 5 objectives, one in the middle of the board at the crossroads that lead to Arnhem bridge and 2 objectives in each deployment zone. The winner will be in possession of 3 or more objectives at the end of the game. 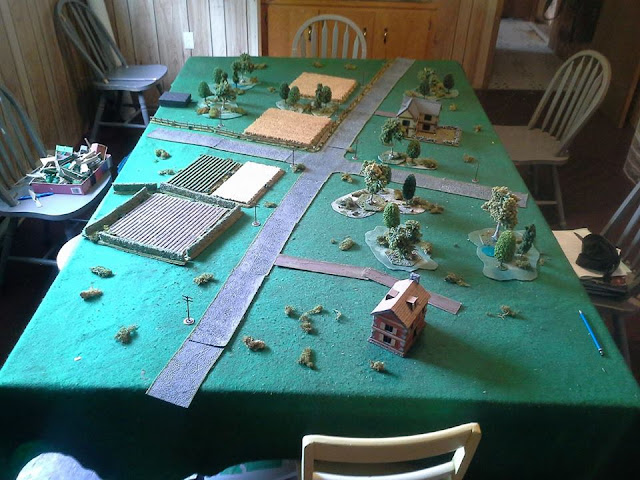 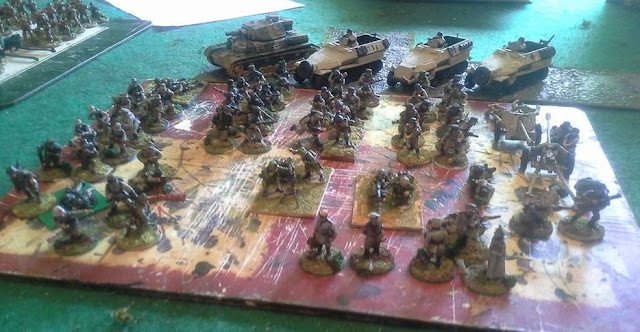 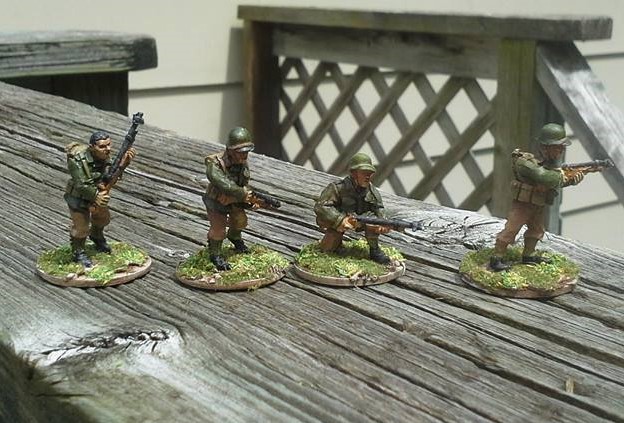 I started a new terrain project on Monday. I bought some paint spill canvas 15x12, acrylic caulking and some paint. I want to paint a game mat blatantly stealing the method used by Ross at battlegameofthemonth blog. I also wanted to make some flexible roads that were bigger scale and more modern then the ones I have.


I put the caulk in a bucket and added grey craft paint and water. I smeared this in a 4x3 hunk of canvas. I let it set for about 4 hours and then rolled a textured rolling pin over the top to give it a cobblestone look. In hind sight, I should have let it set longer but it was bed time and I did not want it to set overnight I let this set for another two days. I cut them into 4"x12" strips with one 4 way stop 12"x12". I did not do any curves for simplicity and because at that scale, it is not unreasonable to have a straight stretch of road. I then painted with light grey and white highlights. A wash of black/brown was added and the edging received some flock. I gave them a seal coat of water down PVA to hold everything in place. Pictures are fuzzy but I am very happy with the results. 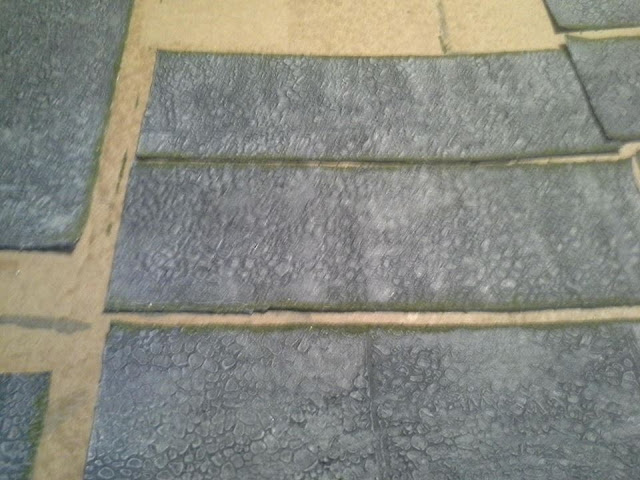 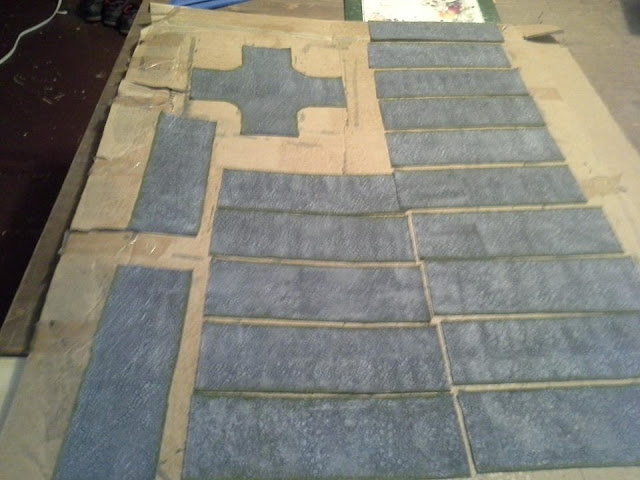 I may get to host a game at our local game day con in a week. Next post may include a newly minted game mat for the occasion.
Posted by Jeff at 06:20 9 comments:

I played a game of Bolt Action the other night with a new opponent. My local game store is hosting Historical Tuesdays Gaming night. This was my chance to meet new players and recruit the GW crowd away form the Dark Side, toward the light of historical miniature gaming. I played a local fellow who proved to be an affable and able opponent. We set up and fought the game in about three hours. I played German veterans from Stalingrad and my opponent played American veterans. Historical opponents if from different periods of the war. 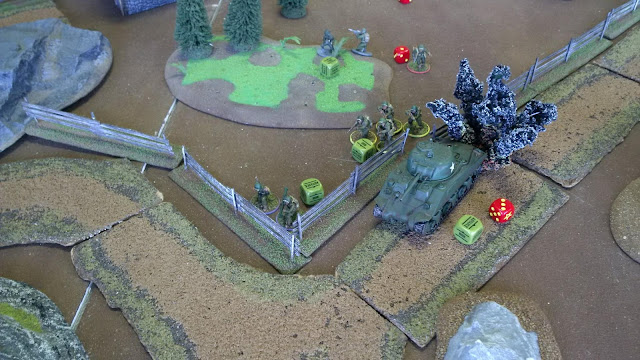 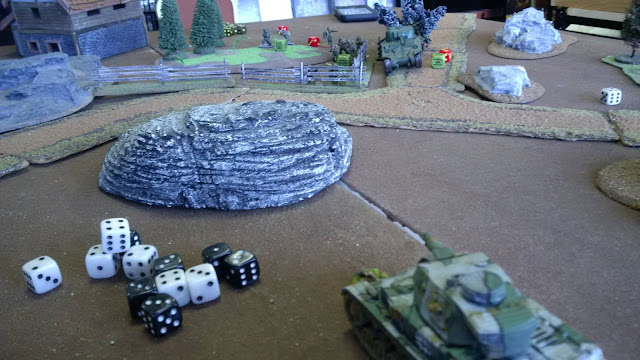 Germans skulking in the woods 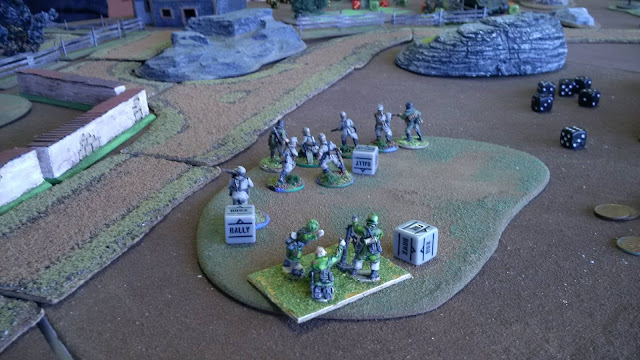 The battle seesawed back in forth with a desultory exchange of fire between Sherman and PAK 38 50mm ATG. There was a decisive moment on the German left flank where my Germans failed to pass an order test and charge an exposed unit of US Rangers. They were charged instead and wiped out. A fun game and the rules came easily and did not get in the way of the fun. I was assisted by a young fellow of about 10yrs age, who drew order dice and commanded the ATG. 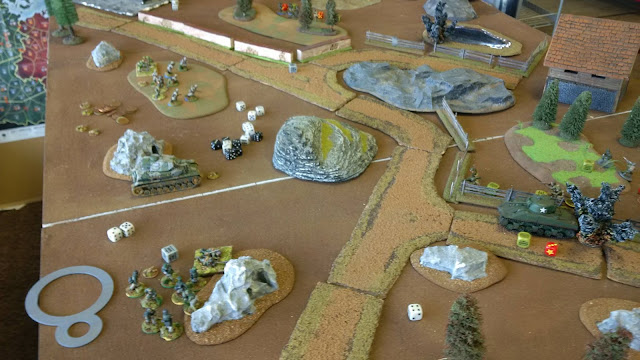 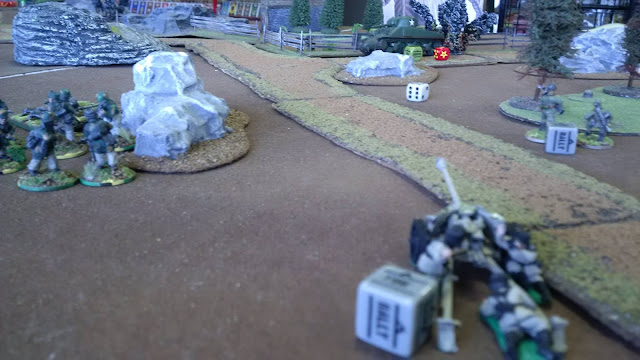 I plan to make this event a regular stop and hope to meet a new batch of gamers and opponents
Posted by Jeff at 06:42 3 comments: