It is December 1942. The German army is making preparations for operation Winter Storm with the goal of liberating the encircled 6th Army near Stalingrad. This is a series of scenarios published by TooFatLardies.

The first scenario is an ambush by a platoon of Partisans attacking a German train. This train contains troops for the upcoming operation. I have been buying train cars and tracks over the past year as I see them become available second hand. I had the hardest time getting an engine. Model train engines are expensive because they contain the motor. Finding one that looked right for the period was proving a challenge. I finally bought a child version that looked great and was cheap. Game on!


Overview of the table 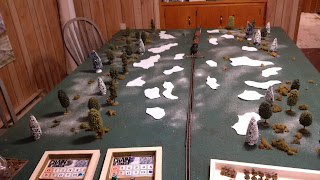 The Partisan plan was to occupy the woods and try to catch the Germans in the open as they try to deploy from the exposed train.

The German plan was to try to attack one flank in strength and gain the cover of the woods.


The train and barricade 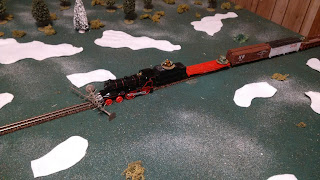 The Partisans started by deploying a section on either side of the train. The Germans deployed the HMG but this was quickly shot up and routed. They then sent two sections to try and take out the partisans on the left. This went poorly as the Partisans deployed their third section with SMGs in close range of the Germans. They routed a German section and battered a second with the help of the Partisan senior leader.

Partisans punish the Germans attacking from the train 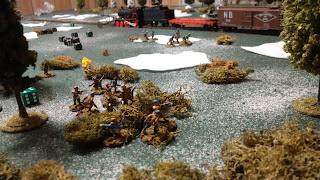 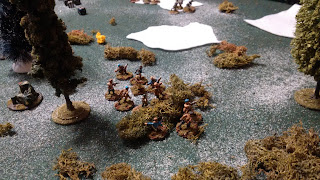 The German cut their losses and withdrew until more reinforcements could clear the partisans.

This game went very quickly. The Partisans had a triple turn to fire on the exposed Germans as they attacked from the train.

The next scenario will feature the train as well but I will need to construct a station house...
Posted by Jeff at 10:52